Natural Tektite Pendants – Tektite is a natural amorphous glass made predominantly silicon dioxide and occurs in shades of black, brown or green. When a meteorite falls through the atmosphere it travels at an astronomical rate and generates so much heat. Interestingly when the meteorite impacts on the ground it then transfers that heat on the local surroundings. From this the rocks surrounding the impact zone melts and create tektites.

Since Tektite is a glass, one needs to be mindful that it was break under vibration or heat. If you are purchasing tektite as a pendant or another form of jewelry, it is best cleansed with warm soapy water or a clean soft cloth. If there is dirt present in the gaps then use a soft toothbrush to remove them.

There is a myth that green Tektites originated from the heavens. In medieval times it was believed that Tektites provided blessing and good fortune for the wearer.

Physically it is said to help repair and revitalise all body organs due to its strong energy.

The astrological signs for Tanzanite are Aries and Pisces. It is the birthstone for those born in the month of December. Tanzanite is also for the throat chakra, third eye chakra and the crown chakra. 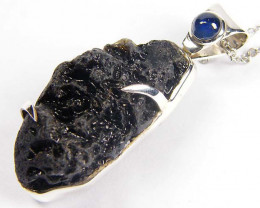