Natural Lepidolite Pendants – Lepidolite is a beautiful gemstone that varies from a pink to purple color. The tone can range from colourless, light pink, deep purple, reddish pink, or even yellow. It is a variety of Mica and was unearthed in the 18th century by Robert Bunsen and Gustav Kirchhoff. Originally it was named ‘Lilalite’ due to its lavender color, although it was later renamed to Lepidolite.

The name is derived from the Green word ‘lepidos’ meaning scale, describing its scale/flaky appearance that is owing to the mineral lithium.

It is said that Lepidolite is the stone of fortune and can bring about this action in one’s life for those who wear it. It is the reason why it’s so popular set into jewelry such as pendant, rings or earrings.

Metaphysically it is thought to aid and bring about balance to emotions. It can help keep the wearer grounded, clarity from negativity, helps achieve a deeper meditative state and helps astral travelling.

Physically it is believed to be a general healer of many ailments including immunity, connective tissue, hair, skin and nails, DNA, recover from addictions such as alcoholism, relief from depression, anxiety, PTSD, insomnia, nightmares, epilepsy, Alzheimer’s and aid any neuralgic and sciatic pain. It is said that when placed under the pillow it will promote a restful and good quality sleep.

The astrological sign for Lepidolite is Libra. It is the birthstone for those born in the month of September. It is said that Lepidolite is for the heart, third eye and crown chakra.

Lepidolite is often cut into cabochon or fancy designs, tumbled, drilled or shaped into sphered and not usually faceted. It is commonly used for creating beaded necklaces, bracelets and all types of jewelry. It suits well for all types of metal predominantly silver. 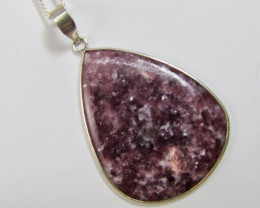 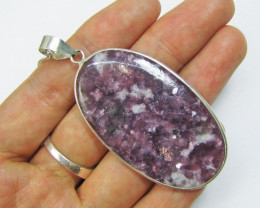